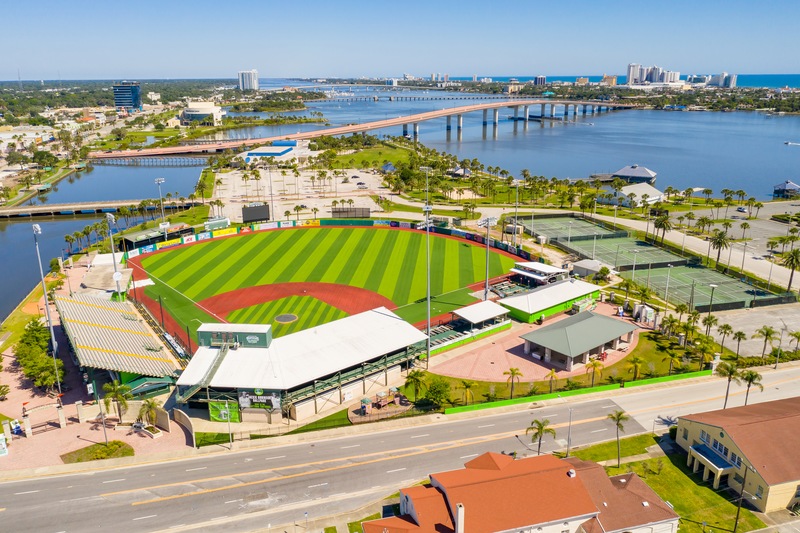 They say baseball is “America’s past time,” and that remains true in Central Florida. In fact, this region has some unique connections to sports history. Not only was Ormond Beach the site of what eventually became NASCAR, but other notable events happened in and around the area, as well.

One of those was the now-historic arrival and game play of Jackie Robinson. Today, a park and statue commemorate the event. Read on to learn more about this region’s connection to baseball, and how you can log every day fun in and around Ormond Beach.

Historians date Florida’s love of baseball back more than 100 years. Today, the Sunshine State boasts two Major League franchises, along with 14 minor league baseball clubs. There are talks about trying to bring a major league franchise to the Orlando area, which would be a first for that locale.

Along with these distinctions, Florida plays host each year to several national teams who use various sites around the state for Spring training purposes. It’s the most of any state, and a tradition that dates back to 1888.

In addition to the positive economic impact that baseball brings, there is also a cultural element. Florida has produced many baseball legends, including Bill White, Lou Piniella, John Henry Lloyd, Buck O’Neil, and Al Lopez, among others.

Local Tribute to a Baseball Legend

Another player who is now considered a legend for his actions both in and outside the baseball stadium is Jackie Robinson. He’s credited with being a ground-breaking figure in the civil rights movement. In 1946, Robinson played the first integrated Major League spring training baseball game, and it happened in Daytona Beach.

The ballpark that now bears Robinson’s name actually opened in June 1914, making it the fourth oldest ballpark in continuous use for professional baseball in the United States. In 1989, the site was renamed Jackie Robinson Memorial Ballpark. A statute of the famous player stands at the Orange Avenue gate — a tribute to the man who many say helped break the race barrier in professional sports.

Every Day Fun and Enjoyment in Ormond Beach

Unique attractions such as the Jackie Robinson Memorial Ballpark and Museum are only part of what makes the Ormond Beach area so special. The city’s most famous visitor, John D. Rockefeller, loved Ormond Beach for the welcoming and laid-back feel of the community. Those family-friendly values remain today, even as the city has embraced modern technologies and conveniences. In fact, more people who visit Ormond Beach return to call this area home for all or part of the year.

Now, you can join their ranks with a new custom home tailored to your exact preferences and requirements. For nearly 30 years, Vanacore Homes has been proud to build outstanding custom residences in Ormond Beach and Palm Coast. Our homes are featured in prestigious communities such as Halifax Plantation, Bulow Creek Preserve, River Oaks, Il Villaggio, Westland Village, Southern Pines, and more. Browse our website to witness the beauty and elegance of which we’re capable. Then, contact us today to discover how simple, straight-forward, and affordable custom home ownership can be.